A Hero of the Old West You Never Heard Of

My name is David Quinn. I like writing about the Old West, particularly if an ancestor figures in the story somewhere. I don't write history books. I write novels whose stories illuminate history. Occasionally, my research turns up a real-life character who fascinates me, even if they don't fit into my story. I'd like to tell you about such an extraordinary person. His name was Lewis D. Carmichael.

Lewis was born in Middletown in Orange County, New York in May of 1825, son of Zophar Carmichael, a farmer of Scottish descent, and Sarah (Eldred) Carmichael. Lewis learned a lot of practical skills working with his father on the farm. At the age of fifteen, Lewis left home to take a job as a "jigger" working for the Delaware and Hudson Canal railroad. It is not entirely clear today what it meant to be a jigger. It may have meant he operated a hand pumped cart for moving along sections of track. He was involved in the construction of rail beds, tunnels, and canals in New York, Indiana, Illinois, Kentucky, Michigan and Wisconsin. By hard work and close application to business, he rose to the responsible position of Assistant Superintendent on the Hudson River railroad. In 1851, Mr. Carmichael removed to Indiana, where he took charge of railroad building. His reputation was that he always completed whatever contract he made.

In 1847 he married Mary E. Bunce, a native of Hartford, Connecticut. Nine children were born to them, all but one surviving beyond childhood. In 1857, he moved his family to Tama county, Iowa. Settling in Otter Creek township, he was engaged in farming for a number of years.

In 1865, Lewis took on the biggest, most famous task of his storied career. The Union Pacific Railroad contracted with him to lead a grading gang in the construction of the eastern segments of the transcontinental railroad. The route he was assigned to prepare led from Omaha, Nebraska through Wyoming and the mountains of northern Utah. He and his gang of fifty or more laborers would build up, or dig down a level rail bed for the track-laying crews moving along constantly in his wake. Following the markings previously made by survey teams, and using picks, shovels, and wooden graders pulled by mules, they moved tons and tons of earth and rock. When necessary, black gunpowder was used to blast through solid rock where mountains afforded no suitable pass.

Here are a few photos of what were termed "Carmichael's Cuts." 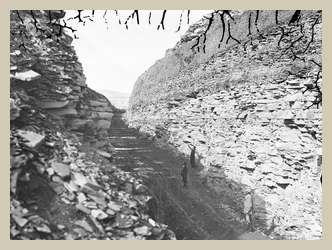 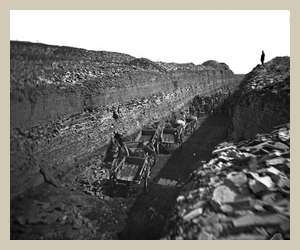 Occasionally, the grading job meant building up, rather than digging down and through. Here is an image of such a "fill." 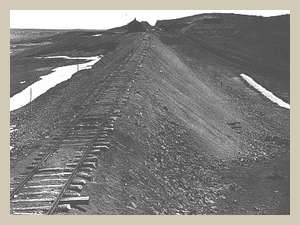 The laborers were mostly Irish immigrants, fresh from soldiering in our Civil War; but they also included some African-Americans. They slept in canvas tents, or in the heat of summer in the open air. They were fed simple, plentiful, nutritious food to keep up the energy and strength their heavy duties required. It was not long before their bodies were nearly as solid and strong as the rock they hewed. All this was performed while passing through areas subject to attack by hostile Indian tribes. They were paid two or three dollars a day. When the payroll didn't arrive, the stubborn Irish graders halted work until the problem was resolved. Here is an image of one of Lewis Carmichael's camps during grading operations.

Lewis Carmichael was demanding, but never cruel. He enjoyed the respect and affection of his crew. He was awarded the greatest portion of the grading task as he became what they called the "King of Graders." Speed of operations was essential as the Union Pacific and its rival Central Pacific were being paid by the miles of track laid. It was a horse race between these companies to see which could win the greater portion of Federal payments and land grants being awarded. 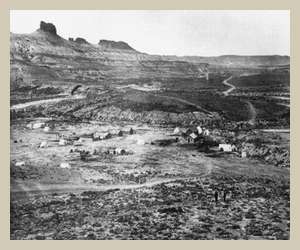 As they neared Promontory Summit near Ogden, Utah, the two companies were virtually yards away from each other on parallel paths. Clods and rocks were thrown at the Chinese laborers of the Central Pacific to frustrate their efforts. The bosses told their crews to cut that out; but it only really subsided when the Chinese fought back with surprising ferocity.

On May 10th, 1869 the two companies wedded their tracks with the ceremonial driving of a golden spike. The following day, another ceremony took place at the Jenks House, a hotel in Echo City, Utah. On that occasion, Carmichael's colleagues and employees gathered to honor their leader of four years of hard, often dangerous, work. Out of their own pockets they purchased from Tiffany in New York a set of sterling silver items engraved with a Carmichael monogram and etched in florid, graceful designs. The gift was priced at $5,000. There was a large tureen, serving ladle, and a set of spoons. Greatest among these gifts was a matching silver tray etched with representations of some of the most dramatic scenes of grading accomplishment attributed to Carmichael and his crew.

These items are pictured below: 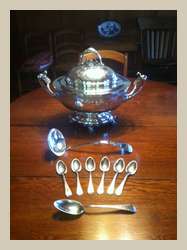 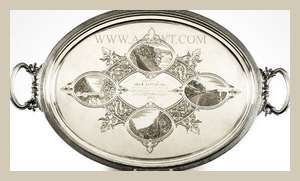 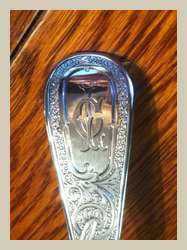 After winding up his responsibilities with the Union Pacific contracts, Carmichael retired to Tama City, Iowa where he became president of the Bank of Tama in 1870. He lived until November, 1912. His accomplishments were many, but his contribution to America's first transcontinental railroad stands as a hallmark of early civil engineering. And yet, hardly anyone today has ever heard of him.

I wish to acknowledge the following sources:

I hope you found this sketch of a hero's life interesting. I would like to bring other stories to you in the future. In the meantime, you might wish to peruse my website: DavidQuinnBooks.com. There you can find descriptions of my three historical novels, review quotes, photos, and essays. First chapters can be read for free on the website. The works, available also in digital formats, are titled:

Bringing Your Genealogy to Life

A significant problem facing active and would-be genealogists is: How to communicate one's findings in a way that is broadly interesting and entertaining within and outside of one's family circle? Most of us have been subjected to dry recitations of vital statistics, migration records, descendancy charts, etc. These will hold the interest of only the most committed enthusiasts. For others there has to be a better way — and I believe there is.

In 1976, Alex Haley published his landmark book, Roots: The Saga of an American Family. Though many genealogists have quarreled with some of Haley's methods and conclusions, one cannot argue with the popular impact of his work. Reading his book and, later, watching its dramatic portrayal as a television miniseries launched my personal interest in genealogy. But, at the time, I didn't really think a great deal about the vehicle he chose to communicate his family's story: the historical novel.

By the early 1980s, I was pursuing the paternal family history using the traditional methods of genealogical research in the pre-Internet era. I would not tout myself as any kind of genealogical expert. I was just following the paper trail as best as I could discern it. In 1982 I visited Ireland and devoted much time and effort viewing microfilm records at the National Library in Dublin and visiting villages, libraries and cemeteries in County Roscommon. I knew my ancestors had survived the Irish Potato Famine, but how? What sustained them between those desperate years and the 1860s when they finally arrived in America?

My goal was limited — data collection only. I had no vision of doing much with it. Later investigations of the family's years in the United States produced more data, some of which had great narrative potential. But I still lacked the vision. Only with the opportunity of an early retirement in the late 1990s did I begin to think in terms of turning my collected data into a story for the benefit of family and friends.

I redoubled my research efforts, focusing now on understanding the world in which my ancestors lived. I needed to place them into a context of the social, political, and economic realities of their day. In doing so, I achieved a flesh and blood understanding that could be applied to the genealogical "skeleton".

In the meantime, my enthusiasm for the historical novel format was heightened by Michael Shaara's Killer Angels, a powerful, Pulitzer-prize winning account of the battle of Gettysburg. Shaara's ability to get into the heads of his protagonists and his use of dialogue conveyed history in a refreshing and compelling way. Here I discovered a style of writing that suited my desire to "package" my genealogical findings — not only for family, but also for the broader literary marketplace.

Choosing a theme was important. What lessons had I learned from my ancestors? What choices of theirs led to success or failure? What advice might they have given, if I could have been around to ask them? Once identified, my theme had to be told through the actions and dialogue of my characters. I had to avoid a didactic or preaching approach in conveying the chosen theme.

I still needed to find personalities for my characters. Some of these, the ancestors themselves, could easily have possessed attitudes, mannerisms, and behaviors which they passed genetically to contemporary family members. I freely appropriated aspects of these personalities and applied them without attribution. For non-ancestral characters, I depended upon the historical records and personal attributes of other memorable acquaintances of my life.

In recent years I turned my attention to a maternal ancestor, a Maine mariner. Captain George W. Dow was the master of the world's largest sailing ship. His survival of a tragic shipwreck provided another opportunity to communicate genealogical discovery in a most dramatic fashion.

I wish to state, unequivocally, that my chosen means of communicating genealogical findings is not for everyone, certainly not for the faint-hearted. Nevertheless, for those with the time and desire, it is a doable task. I had to go back to school to learn the craft of creative writing and attend writers' workshops, but in retirement such efforts were not onerous. Also, changes in the publishing industry in recent years have opened up effective and low-cost options for writers. Self-publishing, print-on-demand, and e-book availability can serve those whose audience is limited to family and friends, as well as those who desire a broader audience.

Here are my suggested steps for those wishing to consider telling their family story in a way that people will readily embrace:

For those who take the challenge, I wish you great success. I know that many of you have great stories to tell. I can personally attest to the deep personal satisfaction one can achieve in the effort. You can get a flavor of what my approach can deliver in each of my published works: 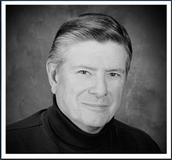 " Master storyteller David Quinn erases time ... To transport the reader is the writer's job. Quinn does just that ... " Mary Sojourner - Novelist of the Southwest

David Quinn is an American author writing historical fiction. His fact-based tales are drawn from the true-life adventures of ancestors discovered through his hobby of genealogy. Whether in the Irish immigrant experience, frontier days in the Old West or in a dramatic sea story, Quinn adds a personal connection to the historical record by giving his characters thoughts, emotions and dialogue.