It was an atypically warm September. The long summer evenings of north latitudes were waning, but the glow of this evening's sunset was enough to light their meeting. Hugh spoke to his assembled young people as they sat together in the yard outside his cottage. He paused at first, staring at his rough, calloused hands. When the chatter of the others subsided, he began.

"My children, your father is no longer young. 'Tis not a time of life when one welcomes great changes. These fields of Anacramp have received the sweat of my brow for near forty years; my dear Catherine is buried nearby." He paused again, struggling to hold his emotions in check. He looked up into the dusky sky, took a deep breath, and allowed the wave to pass. "Leavin' this place will tear at deep-set roots I have put down here. And yet, there is no denyin' we have become too many for my poor acres. And my leasehold is not secure. I know very little of America. I have no assurance that life in the townland of Pittsburgh will be any better than what we have here. I only know that I cannot bear to lose what's left of my family. And that will surely happen if we do nothin'."

Nancy, a female image of her father in color and features, could not bear keeping silent. "Oh, Da! We'd never be leavin' you at all. If some must go, all should go!"

But Charles jumped in, his somber expression previewing his comment. He was a stocky fellow with dark hair and bushy eyebrows. A skeptic of emigration, his attitudes were unchanged, even in the face of economic pressure and the urging of his siblings. "I'm for stayin'. We don't know what's so grand about this place called Pittsburgh. And there are the dangers of the voyage."

James squeezed Annie's hand. "I'll not be takin' my wife, heavy with child, upon the sea for three or four weeks. I, too, want our family to stay together. But I cannot risk the life of our unborn child or its mother. Who can say what we will face on such a journey? "

Patrick, brown haired and brown-eyed, spoke next. He was the keenest proponent of emigration. "We accept what you say, Brother. None of us wish any harm. Still, you must agree that we cannot continue here in Anacramp. Lord Caledon may have his charity, but he will consolidate his lands for pasture!"

James spoke again without rancor. "I accept the truth of what you say. Still if goin' to America is your choice, we must remain here."

Undeterred, Patrick pressed further. "James, you've been wantin' an opportunity in business. The McShanes tell of many such in America, even for Catholics. This might be your best chance. Suppose we delay our departure until after Annie's baby arrives. Could you then consider joinin' in such a journey?"

James was now conflicted. Patrick may be right, he thought. In America, I might well become my own master. He looked at Annie. She knew well the ambitions of her husband and sensed that his winning ways were being wasted on the farm. It was part of what had attracted her so as they had begun courting. She shared his desire for a life beyond the fields and flocks. Now, she gave him a tentative nod, though her chin quivered with emotion. The thought of leaving home and her own family was daunting for her.

James shrugged. " 'Tis no sure thing! If we do agree, Annie and the child must be healthy and strong."

Charles glared at his brother and sulked. "If you leave, James, perhaps I'll be havin' your leasehold."

Now a burst of vigorous debate ensued with the proponents of family unity pressing Charles. But it was soon interrupted by Edward. "Well, 'tis all grand that we might remain a family together. But the sums for passage and provisions will consume every penny of the oats money. There will also be the land journey to Pittsburgh, and then a period of gettin' settled—findin' lodgin', work, and all such. A considerable sum must be set aside for that."

Edward's voice of caution stilled the debate; everyone sensed he had put his finger upon an issue that must be resolved. As the evening darkened, Hugh stood again. "We must give it a bit more thought, children. Let's be in now.”

This is serious historical writing: as such, it seeks to pair the drama of fiction with nonfiction facts and background, and both captures the experiences and feel of its times and provides the necessary supportive platform of history upon which to base these events.

That's one of the novel's strengths. Steel Shamrocks stands apart from other stories of the early experiences of Irish immigrants in America.

It's hard to imagine the lengths that the early Irish went through, both in the 'old country' and in the new America. Steel Shamrocks is firmly grounded in real events and a sense of its times, and its detailed approach will delight serious readers of historical fiction. 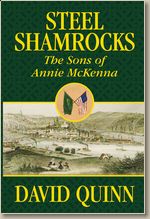 From humble immigrant beginnings in early 19th century Pittsburgh, Bernard (Barney) McKenna and Charles F. McKenna made civic service their chosen path to position and influence. One became a beloved mayor and political reformer. The other was a Civil War soldier and distinguished attorney and jurist. But it was their widowed mother Annie who enabled their rise in the face of tragedy and struggle.

Get the first chapter free and find out why you will not want to put this book down or buy online now!